While many of us started our Memorial Day weekend, firing up our grills, opening pools, and visiting the local beaches, one of our team members utilized her volunteer day for a greater cause.

Stephanie Mlekowski, Project Accountant in our Illinois headquarters, kicked off her Memorial Day weekend by volunteering at the Chicago Veterans Ruck March. 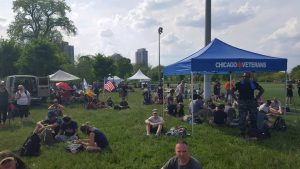 Chicago Veterans, Volunteers, and Participants at the 2018 Ruck March

Every Memorial Day weekend, veterans, family members and friends come together to honor and remember those lost at home and on the battle field. The Chicago Veterans initiated the annual Chicago Ruck March to raise awareness of PTSD, veteran suicide rates, and honor loved ones who have and are suffering post enlistment. The Ruck March spans 20 miles, starting in the northern suburb of Glencoe and ending in Chicago at Lake Shore Drive.

The March involves carrying a fully packed backpack–better known as a rucksack–with an average weight of 20 pounds. Ruck marches are traditionally used in the military to help soldiers prepare to move from point A to point B with a fully packed backpack, including full military gear, over rough and rugged terrain at a rapid rate. The rucksack is a physical representation to civilians of the emotional weight returning soldiers often face as they transition back into civilian life post enlistment and deployment. A recent Veterans Affairs study shows the number of veteran suicides have dropped from 22 to 20 veterans a day. Although this is still a staggering number of lives, the decrease is proving that organizations such as the Chicago Veterans are collectively making a difference.

The Chicago Veterans mission is to help service members and their families in the Chicagoland area transitioning back to civilian life. The organization was formed in 2013 when several student veterans from DePaul University in Chicago came together and wanted to figure out how to simplify their transition from military to civilian life. They reached out to other student veterans to join the conversation and quickly learned that their struggles were universal. After branching out to other Chicago based universities and veterans, they soon realized that the best method of transition was meeting regularly and sharing information, guidance, and peer-to-peer mentorship.

The network focuses on empowering, sharing information, and building meaningful relationships to aide in one’s transition. The empowerment method is based on the idea that by giving veterans the resources, opportunities, purpose and motivation they need to become more productive in their communities, their overall well-being will be enhanced. The empowerment method consists of three core components: camaraderie, employment, and education.

One of their core components, employment, is facilitated through their Employment Readiness Program.  The program helps connect local employers looking to hire veterans with their members. Their program provides members exclusive access, both online and in person, to employers in Chicagoland area looking to hire veterans. They vet every employer prior to accepting their post on their Virtual Employment Board to ensure quality employment opportunities.

Sevan is proud to be a Veteran Owned Small Business that currently has 38 veteran team members. We are honored to have our team members embrace our core value of Charity and utilize their fully paid volunteer day with organizations that benefit Veterans, such as Chicago Veterans.

To find out more about career opportunities with Sevan and our company as a Veteran Owned Small Business – visit us at sevansolutions.com/careers.