Washington D.C. – Sevan’s team members extended their commitment to charity by participating in the 35th Annual Army Ten-Miler in Washington D.C. on Oct. 13 in support of The Fisher House Foundation. 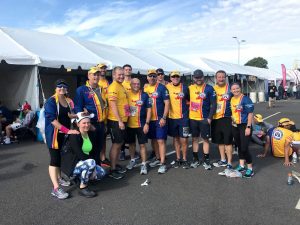 The brisk Sunday morning made perfect race weather for the team and they sported their Team Fisher House shirts proudly. The team ran alongside many U.S service members, military veterans, families and supporters. The course followed the Potomac River and included many historic monuments including the Lincoln Memorial, the Washington Monument and the Jefferson Memorial.

Top male and female finishers for the Sevan Veterans were Mike Riendeau and Erika Truschke with a time of 1:25:07 and 1:48:55 respectively.

As a Veteran Owned Business, Sevan proudly supports the endeavors of The Fisher House Foundation and worked hard to raise funds and awareness for Fisher House. In total, Sevan Veterans were one of the top donors with a total contribution of $14,500. Top donors included John Schneider, Scott Poole and Chris Truschke. Proceeds from the Army Ten-Miler support the lives of service members, veterans and their families when they need it most.

For more than 25 years, the Fisher House program has provided a home away from home for families of patients receiving medical care at major military and VA medical centers. These homes offer free, temporary lodging to military and veterans’ families, allowing them to be close to their loved one during a medical crisis and to focus on what’s important—the healing process.  There are more than 75 Fisher Houses located in the U.S., Germany and the United Kingdom.